” . . . is a woody vine that is well known for its ability to produce urushiol, a skin irritant that causes an itching rash for most people, technically known as urushiol-induced contact dermatitis.” wp

. . . and Methuen’s got plenty of it. I got some of it now, just a smidgen on my eyelid no doubt transferred from a finger which discovered it on the back of my wrist. I tend to get it in little patches about the size of a half dollar and transfer it. Some people are MUCH more susceptible than others., but they tend to know who they are. In New England you run across it early in life just rolling around on your lawn. (remember it’s the thing that looks like a mitten)

Regarding trails under normal usage, poison ivy stays in its place on the ground, so once a trail is improved and the brush is pushed back to normal distance, hikers and cyclists need not fear it. Wandering into the woods will bring you in contact with it, as well as handling a dog that has come into contact with it. We were exposed to it yesterday while picking up all the nonsense that was hiding under the shrubbery.

My favorite anti-Poison Ivy aids are Tecnu and Ivarest. Usually I wash my hands and face with a cleanser designed to remove Poison Ivy oils, when I come in from the woods, either Tecnu or a bar soap. If I miss a spot, the Ivarest helps negate the itch, but it’s that lovely pink paste that tells the world what you have been up to in your off hours. IF the you can’t ignore the itch, cover the spot with a non-adhesive bandage. 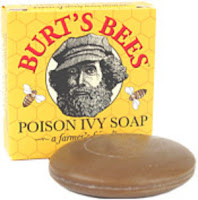 “The reaction caused by poison ivy, urushiol-induced contact dermatitis, is an allergic reaction. Around 15%[5] to 30%[6] of people have no allergic response, but most people will become sensitized with repeated or more concentrated exposure to urushiol. Reactions can progress to anaphylaxis.

Urushiol binds to the skin on contact, where it causes severe itching that develops into reddish colored inflammation or non-colored bumps, and then blistering. These lesions may be treated with calamine lotion, Burow solution compresses, or Aveeno baths to relieve discomfort.[7] In severe cases, clear fluids ooze from open blistered sores and corticosteroids are the necessary treatment. 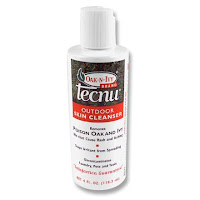 The oozing fluids released by itching blisters do not spread the poison. The appearance of a spreading rash indicates that some areas received more of the poison and reacted sooner than other areas or that contamination is still occurring from contact with objects to which the original poison was spread. The blisters and oozing result from blood vessels that develop gaps and leak fluid through the skin; if the skin is cooled, the vessels constrict and leak less. If poison ivy is burned and the smoke then inhaled, this rash will appear on the lining of the lungs, causing extreme pain and possibly fatal respiratory difficulty. If poison ivy is eaten, the digestive tract, airway, kidneys or other organs can be damaged. An untreated rash can last up to four weeks.

es can cause a reaction. In addition, oil transferred from the plant to other objects (such as pet fur) can cause the rash if it comes into contact with the skin

People who are sensitive to poison ivy can also experience a similar rash from mangoes. Mangoes are in the same family (Anacardiaceae) as poison ivy; the sap of the mango tree and skin of mangoes has a chemical compound similar to urushiol. “